The comeback was on.

Carl Frampton was in the shape of his life and ready to face Emmanuel Dominguez at Philadelphia’s Liacouras Center, all set to return to the ring for the first time since his defeat to Josh Warrington in December.

Speaking exclusively on JOE for his podcast, TKO with Carl Frampton, Carl revealed the freak injury which forced him to cancel his fight on Saturday.

EXCLUSIVE: Carl Frampton reveals the freak hand injury which has forced him to cancel his comeback fight. pic.twitter.com/itGw7UMFmc


"I've been away from my kids. Summer holidays, they've been off school, I've been away, and... It just feels like an absolute waste, and money down the drain." 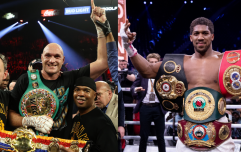 END_OF_DOCUMENT_TOKEN_TO_BE_REPLACED

"Probably close to £30k on the training camp. I've been out here in Philly for 3 and a half weeks now, and I have nothing to show for it."

"It’s shit. I know people expect you to say this, about your training camps being good and perfect, but this is the most disciplined I've ever been, in sparring, in listening to instructions, in bag work and everything."

"And then I go and get my f**king arm smashed on a stupid bit of whatever the f**k it is. It should be nailed to the floor, and it isn't. You couldn't make it up."


popular
Jadon Sancho to Manchester United transfer believed to be very close
It was Pierre-Emerick Aubameyang's final but Emiliano Martinez's moment
A must-see Jurgen Klopp documentary on Channel 4 this evening
Antonio Conte likely to leave Inter Milan after just one season
Footballers to be sent off for coughing on an opponent under new rules
How to find out which restaurants near you are participating in Eat Out to Help Out
The JOE Friday Pub Quiz: Week 202