Everyone is saying the same thing about the Soccer Aid pitch

Fans travelled in their thousands today to watch Soccer Aid, the one game per year that brings entertainment to Old Trafford. 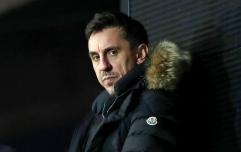 END_OF_DOCUMENT_TOKEN_TO_BE_REPLACED

The charity friendly is competed between an England side and a Rest of the World XI, both comprising retired pros, celebrities and some players in the twilight of their career, such as Yaya Touré and Robbie Keane.

The quality of football is never that great, that's part of the charm, but people feared it would be worse than usual today when they saw the state of the pitch.

There was a Rolling Stones concert at Old Trafford midweek, which meant that the pitch had to be used for those standing at the gig, which would explain why some patches looked more green than others.

Still, it didn't stop Olly Murs playing a defence splitting pass to Darren Bent in the opening minutes. The former England striker made no mistake with the finish.

If that’s not a new pitch just been laid at Old Trafford then that’s a terrible pitch btw.