No, you're not seeing things.

That really is viral star and hardcore Manchester United fan, Andy Tate, in an actual trailer from EA Sports. 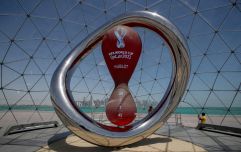 END_OF_DOCUMENT_TOKEN_TO_BE_REPLACED

Ahead of the release of Fifa 18, the video-game developer has gone all out to promote the journey mode that will feature in the game.

Just like they could in the 2017 edition of the game, Fifa 18 players will play as Alex Hunter, the protagonist whose career progression is all down to you.

And if you thought that the focus on Hunter couldn't get any more in-depth then think again because the latest trailer sees everyone from Harry Redknapp to Rio Ferdinand to a smirking Pep Guardiola comment on the player, who has his own real-life Twitter account. 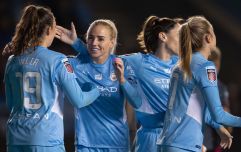 END_OF_DOCUMENT_TOKEN_TO_BE_REPLACED

And, of course, Andy Tate.

Fifa 18 will become available for gamers on September 29 and Cristiano Ronaldo will get the honour of featuring on the cover while his namesake from Brazil will be included in the game for the first time.

But for those of you who just can't wait to see what lies ahead for Alex Hunter, his role in the game sounds better than ever.

"After a breakthrough first year in the Premier League, the whole world is talking about Alex Hunter. Now he's back for a second season, and rumour has it, he's on the move..."

popular
Fans shocked by Tommy Lee's extremely X-rated post on Instagram
Robin Williams' wife shares reason why he killed himself
‘Time traveller from 2090’ warns humans of worst event in history in coming days
Groom shocks wedding by playing video of his bride cheating with her brother-in-law
Runner finishes last in 400m race as penis keeps falling out of shorts
Woman arrested after husband caught her on video allegedly using drain cleaner to poison him
Intruder who broke into monkey enclosure in Tasmania at risk of ‘potentially fatal’ herpes
You may also like
Sport
Shakhtar Donetsk taking FIFA to CAS over €50million worth of damages
Entertainment
Lionel Messi is no longer the highest-rated player in new FIFA leak claims
Sport
FIFA-ranked referee Igor Benevenuto becomes first to come out as gay
Sport
Sepp Blatter and Michel Platini acquitted of corruption by Swiss court
Sport
Half of all players at Euros and AFCON were abused online, according to FIFA study
Next Page