Cantona is not impressed by Neymar's play acting

Eric Cantona is one of football's most charismatic characters. His unapologetic confidence, bordering on arrogance, makes him a polarising figure but those who like him love him and those who don't, really don't like him.

But just as Manchester United fans pride themselves on the fact that their club is 'hated, adored, never ignored', Cantona embodies the same mantra.

The Manchester United legend recently bodied Neymar on Instagram harder than an angry right-back, mocking his new hairstyle. It went down a storm, with thousands of fans piling in. Neymar then toned down his new haircut, though whether Cantona's bodying was the prime reason behind it remains to be seen.

And he's back at it again, this time with a video for Eurosport in which he absolutely lays into Neymar's play-acting. He even compares the Brazilian talisman to a suitcase.

Bask in all its glory here. 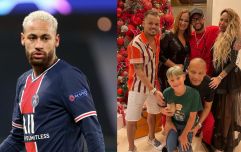 END_OF_DOCUMENT_TOKEN_TO_BE_REPLACED

For Neymar's sake you'd hope he's fully focussed on the Brazil vs Mexico match this afternoon and that nobody has shown him this video. He's not the most modest man in the sport, and you'd imagine he wouldn't appreciate this banter targeted at him and his vanity. We will see.