Southgate has made some big calls

The official 23 man England squad for this summer's World Cup in Russia has been announced. Joe Hart and Jack Wilshere are the most notable omissions, while Nick Pope and Danny Welbeck have all been included.

For the first time in history the Football Association has announced the squad via video, in a campaign which has sought to tap into the players' personalities and what they mean to their respective communities, as well as the country as a whole.

The FA and @England are changing the game with their official Word Cup squad announcement! Fair play 👏👏👏 #ThreeLions 🦁🦁🦁https://t.co/0Tl6Mmsr9O pic.twitter.com/jIvnNEtAvp

Gareth Southgate said before the announcement that there would be no surprises, and he has stuck to his word, opting not to hand out any wildcards to youngsters like Jadon Sancho or Ryan Sessegnon. The England boss has only handed out one debut, to Trent Alexander-Arnold, who has impressed for Liverpool this season.

Jonjo Shelvey and Jamaal Lascelles miss out despite their good form throughout the season, with Southgate preferring to take Ruben Loftus-Cheek, and Trent Alexander-Arnold instead of the Newcastle duo.


Loftus-Cheek's recent form on loan at Crystal Palace has earned him a call-up. The Chelsea man also won Man of the Match in his senior debut for the Three Lions against Germany, back in November. 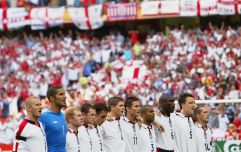 QUIZ: How well do you remember England's past tournament exploits?

END_OF_DOCUMENT_TOKEN_TO_BE_REPLACED

The full squad is as follows:


popular
Grant Imahara, co-host of Mythbusters, has died aged 49
Macaulay Culkin reveals disturbing reason he left Hollywood as a child
A definitive ranking of every swear word from worst to best
Clive Tyldesley replaced as ITV's main football commentator
This is how much time most men need after orgasm before they're ready for another round
The definitive ranking all 151 original Pokémon from worst to best
Here's how to see who's been taking screenshots of your Instagram Stories