David Moyes is currently in New York with his Sunderland team.

The Premier League's bottom side are on a mid-season break in the Big Apple, and their manager is hatching a plan to prevent them from being relegated. 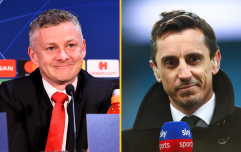 END_OF_DOCUMENT_TOKEN_TO_BE_REPLACED

He has absolutely nothing to do with the Champions League last 16 first leg tie between Bayern Munich and Arsenal, yet many on social media were mentioning Moyes.

He was, according to football statistics website Who Scored, the best player on the pitch.

You're probably thinking what has this got to do with poor ol' Moysey?

Well, Moyes, when he was Manchester United manager back in 2013, reportedly turned down the chance to sign Thiago from Barcelona because he wasn't convinced of his talents.

According to Spanish football journalist Guillem Balague, Moyes passed on signing the player, as he didn't think he could cut in the Premier League.

Bayern negotiating with FCB 4 Thiago,all will b confirmed soon. Despite buy out clause Bayern prefer 2 talk to FCB.Utd were willing 2 pay it

United were willing to pay clause 4 Thiago. But Pep believed in Thiago. Moyes not so much (will his football work in PL? Moyes wasnt sure)

Thiago went to Bayern instead, and showed against Arsenal he is perfectly suited to playing against Premier League sides.

The internet has a long memory though, and didn't forget Moyes' reported blunder.

Fergie had Thiago deal wrapped up and Moyes pulled the plug 🖒🖒

Just checking: this is the same Thiago that David Moyes wasn't sure about?

Remember when Moyes tried to convince us Fellaini was better than Thiago? Lol

Just think, if Moyes hadn’t been completely incompetent, Thiago could’ve been playing for us. #mufc #justsaying

Makes me so sad remembering how Moyes passed on Thiago to get Fabregas and ended up with neither...

Shout out to Moyes for not signing Thiago

Your reminder that David Moyes felt like he needed to see more from Thiago to sign him for Manchester United. This is my only joy right now.