The 1999 gang are reuniting for one last hurrah

David Beckham has confirmed he will be among the stars of Manchester United's treble winning side to play in a charity friendly at Old Trafford in May.

The match will see several members of the famed 'Class of '92' digging their boots out for a match against a Bayern Munich legends XI in a repeat of the 1999 Champions League final, which United won 2-1 in dramatic circumstances thanks to the man of the moment, Ole Gunnar Solskjaer.

The match will take place on May 26 and tickets are available now.

Nicky Butt, Paul Scholes, and both Neville brothers will line up for United, and will be joined by Jaap Stam and Peter Schmeichel to name just a few. 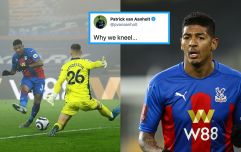 END_OF_DOCUMENT_TOKEN_TO_BE_REPLACED

"I'm so excited to be going back to Old Trafford in May," said David Beckham.

"1999 was such a massive year for us so recreating that moment is going to be really special. To be back together as a squad and to be managed by the boss again is huge. Huge for us and for the fans; I can't wait."

The Manchester United Foundation will use funds raised from the match to work with young people across Greater Manchester.

You can relieve the 1999 match by watching the full highlights here.

popular
#ResignBorisJohnson trends on Twitter after he was found to have misled parliament
The JOE Pub Quiz: Week 233
QUIZ: Can you name England's XI from every knockout loss since 2002?
Imagining a North vs South Premier League All-Star match
YouTubers trick royal experts into commenting on Harry & Meghan interview that hasn't aired
QUIZ: Identify the clubs these Football Italia legends played for - #1
Crazy scenes outside Ibrox as Rangers fans welcome Steven Gerrard ahead of huge game
You may also like
Sport
Rio Ferdinand recalls Roy Keane sparking out United youngster in training
Sport
FA decide to take no action against Shaw and Solskjaer for referee comments
Sport
Marcus Rashford and teammates reach out to Timothy Fosu-Mensah after knee injury
Sport
Man Utd claim Luke Shaw misheard referee over penalty decision
Sport
Solskjaer hits out at "outside influences" on referees over Man Utd decisions
Next Page