What's missing from that statement? 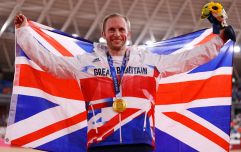 END_OF_DOCUMENT_TOKEN_TO_BE_REPLACED

You're right. One person cannot win a synchronised event. In order to be synchronised, you need to synchronise with a partner. In this case, the other bronze medal winner was Daniel Goodfellow, but rather cruelly, the Olympic medalist was completely left off the Daily Mail's front page story.

Although the British public are overjoyed with the pair's incredible achievement, the front page snub left a bitter taste in some people's mouth. The general consensus is that only one half of the team is getting the credit they both deserve.

and is that meant to be a surprise ? You do know it was a syncro dive where's the other guy ???? Ridiculous journalism

didn't Tom win as part of a duo? Why only a picture of him?

Congrats to Tom Daley (and his synchro partner Dan Goodfellow, who seems to be getting cropped out of the story): pic.twitter.com/DEizCZT14s