Cristiano Ronaldo has responded on Instagram to allegations in German magazine Der Spiegel that he raped an American woman in 2009.

Kathryn Mayorga, 34, has accused the Juventus forward of attacking her in a Las Vegas hotel room in the same month that he completed a record-breaking move from Manchester United to Real Madrid.

END_OF_DOCUMENT_TOKEN_TO_BE_REPLACED

Taking to Instagram Live on Saturday, Ronaldo said: "No, no, no, no, no. What they said today? Fake, fake news.

"They want to promote [themselves by using] my name. It’s normal. They want to be famous to say my name, but it is part of the job. I am a happy man and all good."

Ms Mayorga told Der Spiegel that she met Ronaldo in Las Vegas’ ‘Rain’ nightclub, where she worked as a promoter, in June 2009.

She says she was then invited to his suite in the Palms Place Hotel, where it is alleged that Ronaldo raped her. 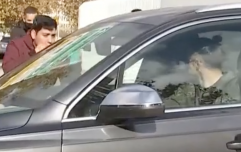 END_OF_DOCUMENT_TOKEN_TO_BE_REPLACED

Ms Mayorga says she filed a rape report with the police the next day. It is claimed that she negotiated a £287,000 out-of-court settlement with Ronaldo’s lawyers in 2010, which stipulated that she wouldn’t go public with her allegations.

But after hiring a new lawyer, Leslie Mark Stovall, Ms Mayorga has now filed a civil complaint that seeks to declare the stated non-disclosure agreement as void.

She says she only signed the original document because she was “scared” and “didn't want her name” in the public spotlight.

Ronaldo’s lawyer, Christian Schertz, has vehemently denied the allegations, stating that he would seek compensation on behalf of his client for “moral damages in an amount corresponding to the gravity of the infringement, which is probably one of the most serious violations of personal rights in recent years”.