Very few of us saw it ending like this

Joe Rogan went and sat down beside the injured, defeated Conor McGregor after he had fractured his shinbone and lost to Dustin Poirier. It was an iconic image and one that fight fans will long remember.

END_OF_DOCUMENT_TOKEN_TO_BE_REPLACED

McGregor could not continue after stepping back on his left leg and snapping his lower tibia, at the end of the first round. Poirier was awarded the doctor's stoppage TKO win and the war of words continued between him and McGregor even after his arm was raised in victory.

Rogan interviewed Poirier first but McGregor could be heard shouting at him during his post-fight debrief. The veteran UFC commentator then approached McGregor to get his thoughts on a heart-breaking loss.

What followed was a simply jaw-dropping interview, with McGregor beaten but unbowed and unrepentant. 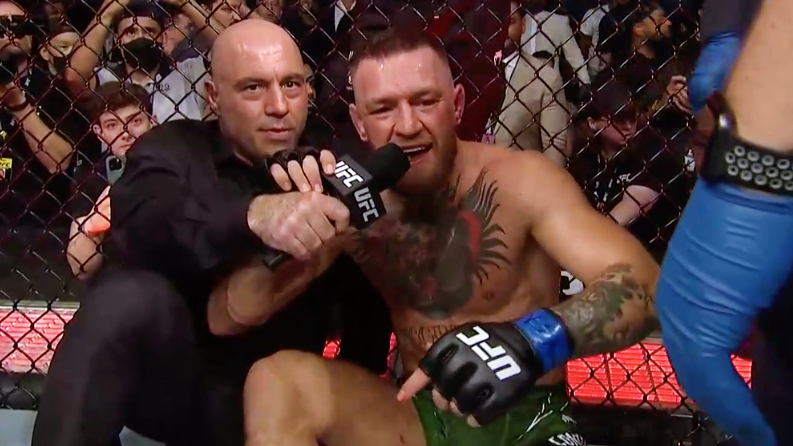 Here is the full transcript of that Joe Rogan interview:

ROGAN: Conor, the fight obviously stopped in a horrible way. Give us your thoughts on how it was going.

MCGREGOR: I was boxing the bleedin' head off him and kicking the bleedin' leg off him. Usual shite, [he] dived to close the distance. THIS IS NOT OVER! If I have to take this outside with him, it's on outside. I don't give a bollocks.

ROGAN: He said that he believes that one of the kicks he checked broke your leg.

MCGREGOR: There was NO CHECK! There was not one of them was checked. Your wife is in my DMs! Hey baby, hit me back up. I'll chat to you later on! I'll be at your after-party. The Wynn nightclub. You look in bits, ya little ho! F*** him!

MCGREGOR: Just, the thing had separated and I bleedin' landed on the wonky leg, like Anderson Silva that time. Something similar to that. It's a f***ing mad old business. F*** sake!

ROGAN: Listen, it was a wild fight, for as long as it lasted. I'm sure you'll be back and I'm sure you're going to want Dustin again. And I'm sure he'll oblige you.

That was it from Rogan and McGregor and the stretcher soon arrived to take 'The Notorious' off through the crowds to receive medical attention.

Poirier later said he would be willing to fight McGregor again, but only if he returned and got a win or two in the lightweight division.