He couldn't help himself

Conor Coady was left speechless after Sky Sports pundit and former Liverpool teammate Jamie Carragher claimed live during an interview on Monday Night Football that Jurgen Klopp had expressed an interest in signing the defender as a replacement for the injured Virgil van Dijk.

Coady was speaking to the Sky pundits after helping his Wolverhampton Wanderers side to their third consecutive league win with a 1-0 victory away to Leeds United.

Towards the end of the interview, Carragher clearly saw the opportunity for a bit of mischief, and so decided to ask Coady how he felt about the (untrue) fact that Klopp had said he might bring Coady back to Anfield.

Coady was an academy graduate at Liverpool, before leaving the club in 2014.

"You won't be aware but Jurgen Klopp tonight has done his Champions League press conference ahead of the game with Ajax," said Carragher.

"He's actually mentioned you and two other players who he thinks could actually be replacements for Virgil van Dijk, would that come into your thinking?" 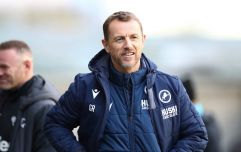 END_OF_DOCUMENT_TOKEN_TO_BE_REPLACED

Unwilling to take the bait, Coady responded: "I can't believe you've just put this on me here, no!

"I can't believe it. Not at all, I love playing for this football club every single day.

Carragher, pushing it a little further, added: "You must be honoured though, with Klopp saying that?"

At this point presenter Dave Jones popped in, advising Coady not to fall for it: "Conor, don't believe a word he is saying. Don't get dragged into that honestly!"

Coady has been the picture of consistency since helping Wolves gain promotion to the Premier League more than two years ago. He is yet to miss a Premier League game for Nuno Espirito Santo's side, and his composure on the ball has seen him become a regular fixture in Gareth Southgate's England squads.