Oh good, the League Cup has a brand new name.

With half of the country still calling it the Rumbelows / Coca-Cola /Worthington's Cup, it was announced back in April that next season's competition will be known as the Carabao Cup. 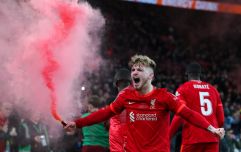 END_OF_DOCUMENT_TOKEN_TO_BE_REPLACED

Carabao, for those of you not already aware, are a Thai energy drink company, and have decided to mark their first season as the sponsors of the competition by doing something special: holding the first round draw in Bangkok.

In this day an age - where World Cups are moved to the winter so they can be played in tiny desert states where searing summer heat makes it impossible to play football matches - this sort of thing shouldn't really surprise us... especially seeing as Donald Trump was conducting League Cup draws in New York over two decades ago...

But as word of the destination of this Friday's draw did the rounds, plenty of people hearing the news were a little shocked.

Initially, most people struggled to digest the news that the competition had a new name...

Whereas others struggled to come to terms with the fact that the draw was being held in the Thai capital...

Carabao Cup? Bangkok? Have I awoken from a coma into a parallel universe ?!?

From Bangkok? The spiritual home of the league cup obviously ffs https://t.co/O11poxEi2H

Good to see it being drawn in Bangkok. Anything is available for the right price.

Be sure to tune in on Friday at 1pm, when the draw is streamed live.