BT Sport could soon be on the hunt for replacements for not one but two of their most popular pundits.

Steven Gerrard will have more than enough on his plate with his new job as Rangers manager so he won't be free to provide his analysis to BT Sport next season. 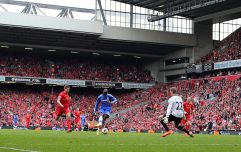 END_OF_DOCUMENT_TOKEN_TO_BE_REPLACED

And it's now being reported that Frank Lampard will be following his former England teammate from punditry into management as the Chelsea legend has been linked with the vacancy at Derby County.

Lampard is believed to be the Rams' top pick to replace Gary Rowett and if he agrees to take charge at Pride Park then BT Sport will have some job ahead of them to fill their studio for the upcoming season.

The Daily Mail report that the broadcaster is lining up Manchester United legend Roy Keane as a potential addition for the coming campaign.

Roy Keane on the Roma defence against Liverpool! pic.twitter.com/t4w6o81RJK

The Republic of Ireland assistant manager, who has proven to be one of the more outspoken analysts in his time working for ITV, is wanted by BT Sport to add to their coverage of Premier League and Champions League action.

There would likely be complaints from rival supporters of the coverage being Manchester United-heavy as BT Sport already use both Rio Ferdinand and Paul Scholes on a regular basis, however Keane seldom has anything nice to say about his former side.

After the Champions League final on Saturday, host Gary Lineker seemingly bid farewell to both Gerrard and Lampard, saying: "Steven, wish you well. Whatever happens Frank, wish you well. Rio, thanks very much as ever."