The German side clearly mean business

Borussia Dortmund have signed Julian Brandt, Thorgan Hazard and Nico Schulz for a combined figure in the region of £70 million.

Midfielder Brandt, 23, made the move from Bayer Leverkusen for around £22.1m, just hours after attacker Hazard, 26, the younger brother of Chelsea's Eden Hazard, joined from Borussia Mönchengladbach for £22.5m.

While left-sided defender Schulz, 26, signed for a reported £23.78m transfer fee on Tuesday.

"He is still a young player with great development potential," Dortmund’s sporting director, Michael Zorc, said of Brandt. "He can be used in a number of attacking positions and will enrich our game with his creativity."


He added of Hazard: "We are delighted that Thorgan has decided to go with Borussia Dortmund. He is a seasoned Bundesliga player and Belgian national player, who will help us with his pace and quality of finishing, the proof has been provided." 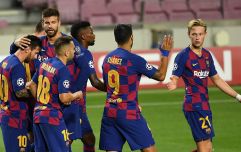 Why Barcelona weren't wearing their new kit against Napoli

END_OF_DOCUMENT_TOKEN_TO_BE_REPLACED

Lucien Favre's squad lost out to Bayern Munich by two points in the Bundesliga last season and will hoping the reinforcements will help them in their next campaign.

Although, Dortmund's key player Jadon Sancho could leave the side over summer for a figure in excess of £100m.

Paris Saint-Germain, Juventus, Real Madrid and Barcelona are all said to be monitoring the English prospect, although Manchester United are also interested.

Sancho was reportedly nailed on to move to Manchester United this summer before Ole Gunnar Solskjaer's side failed to qualify for the Champions League.


popular
Who is the most handsome footballer in the Premier League?
The 11 unbreakable rules of making a cup of tea
Young guys absolutely lose it hearing Phil Collins' In The Air Tonight for the first time
The JOE Friday Pub Quiz: Week 203
Juventus' appointment of Pirlo proves meritocracy in management is a myth
England could lose several promising youngsters to Jamaica
Why Barcelona weren't wearing their new kit against Napoli