Thierry Henry will have to wait a little while longer before he takes charge of a football club.

Henry had been linked with a move to Bordeaux last month after the Ligue 1 side suspended manager Gus Poyet for an outburst aimed at the club's owners.

Having already resigned from his role with Sky Sports in order to focus on his dream of management, Henry was made favourite to take over at the Nouveau Stade de Bordeaux.

"Over the last 4 years I have had some extremely rewarding coaching experiences in football," Henry tweeted. "These experiences have only made me more determined to fulfil my long term ambition to become a football manager.

"It is with sadness, therefore, that I have decided that I must leave Sky Sports to enable me to spend more time on the pitch and concentrate on my journey to achieving that goal.

"I would like to thank everyone at Sky for making me feel so welcome and at ease throughout my time with them and I wish them all the best for the future. Great memories."


Henry held preliminary talks with Bordeaux's new ownership group - US investment fund GACP - but it appears that the Arsenal legend's wage demands were too high. 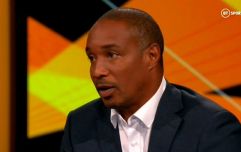 END_OF_DOCUMENT_TOKEN_TO_BE_REPLACED

The Frenchman was back in the dugout for Belgium's pair of victories in the international break and will continue in his role as Roberto Martinez's assistant after negotiations with Bordeaux broke down.

"In each business, whether it be a football team, a shop or an insurance company, there are business plans," head of GACP, Joe DaGrosa, told L'Equipe. "And sometimes that involves taking difficult decisions.

"We had hoped to reach an agreement with Thierry Henry, but sometimes reasonable people can disagree. That's what happened.

"I have a lot of respect for him. He was a great player and he has a very interesting career plan, but we took a financial decision and not an emotional one.

"Thierry Henry perhaps had a bad impression of our talks but at the end of our meeting, we made it clear that it was we who were leaving the talks for financial reasons.

"There was no confusion on the matter."


popular
CBBC star Archie Lyndhurst has died aged 19
PSG begin talks with Lyon to over sale of Arsenal target Houssem Aouar
Beyond The Mat remains the greatest wrestling documentary of all time
Quiz: Which player has scored more goals for Manchester United?
Borat tries to kill COVID with a frying pan in first sequel trailer
QUIZ: Match the quote to the It's Always Sunny in Philadelphia character #2
Henry Cavill speaks out on Enola Holmes copyright lawsuit