Stoke City striker Saido Berahino served a drug ban before joining the club, according to reports.

Berahino moved to the club from West Bromwich Albion last month, and the Daily Mail reports that he completed a ban earlier in the campaign.


According to the paper, the England Under-21 international is believed to have tested positive for an unspecified recreational drug in an out-of-competition test conducted last year. Stoke are thought to have been aware of the situation before completing a deal for the 23-year-old. 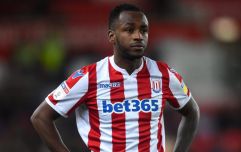 END_OF_DOCUMENT_TOKEN_TO_BE_REPLACED

Berahino made his Stoke debut in this week's 1-1 draw with Everton, having last played for West Brom's first team back in September. The Mail reports that he also went close to three months without representing the Baggies' Under-23 side.

It is unclear how much of that time out came as a consequence of a drug-related suspension. The substance in question is not thought to be on the WADA banned list.

He was placed on a special training regime by West Brom earlier this season, with reports at the time suggesting the club were concerned by the player's weight issues, and spent some time out of the UK after admitting to mental health issues as well as physical struggles.