Ben Stokes recalled to England squad after being cleared of affray

He was cleared of affray in court today

The England and Wales Cricket Board have added Ben Stokes to the England squad for their third test against India at Trenth Bridge which begins on Saturday.

The all-rounder was acquitted of affray in a Bristol court today and has rejoined the England squad after missing the second of five Test matches against India.

Cricket Discipline Commission can now start its disciplinary process for Stokes and England team-mate Alex Hales who was also involved in the incident outside Bristol nightclub Mbargo.

Stokes played a key role in England's victory over India at Edgbaston in the first Test of the series, getting the most important wicket when he got Virat Kohli out lbw. 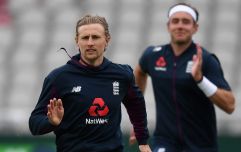 END_OF_DOCUMENT_TOKEN_TO_BE_REPLACED

Chris Woakes replaced Ben Stokes for the second test at Lords and hit his first ever Test century, earning himself a place on the Lords honours boards.

Stokes will not necessarily walk back into the team for the third Test, but will be available for selection.