The youngster could make the move this month

Bayern Munich are on the verge of signing Canadian teenager Alphonso Davies from Major League Soccer side Vancouver Whitecaps, according to reports in the United States. 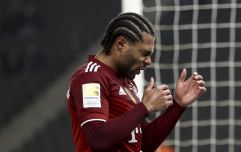 END_OF_DOCUMENT_TOKEN_TO_BE_REPLACED

According to the Globe and Mail, Davies will be officially absent from the Whitecaps' next MLS match, with the team's permission.

His status is "unknown", and it remains to be seen whether Bayern Munich loan him back to the Vancouver Whitecaps or bring him straight to the Bundesliga, should the transfer be completed.

Davies was named by journalists from The Guardian as one of the best 60 young players in the world last year.

If completed, the transfer will be an MLS record, with the previous record for the amount received by an MLS club being the £4.5 million New York Red Bull received from Chelsea for centre-back Matt Miazga.

Source: Bayern Munich makes what would be a league record transfer amount of $12 million on #VWFC attacker Alphonso Davies: https://t.co/anGEniLsOO

popular
Sex expert reveals how men can last longer in bed
Eric Bailly fails spectacularly with no-look penalty in AFCON shoot-out
Dr. Dre shares unbelievable video of Eminem's skills to prove no rapper could beat him
Collapse of sports crypto giant leaves fans with worthless tokens
Katie Price joins OnlyFans days after arrest to 'empower women'
Why dogs are getting sick and symptoms owners should look out for
'I'm so beautiful my friends don't invite me to birthday parties as I'll steal the show'
You may also like
Sport
Alphonso Davies diagnosed with myocarditis after Covid-19 recovery
Sport
Four European giants enter negotiations to sign Antonio Rudiger on free transfer
Sport
Frenkie de Jong could snub Man United 'because the weather is bad'
Sport
Thomas Muller claims Barcelona couldn't 'handle the intensity' of Bayern Munich
Sport
Joshua Kimmich confirms he won't play until 2022 due to lung infection
Next Page