And there we were, naively thinking we were done with writing about soon-to-be released football kits for another year...

We were wrong. Very wrong.

Barcelona may well have unveiled the kits they'll be wearing over the course of the 2018/19 campaign (if they've not officially done so, we've already seen the leaked designs splashed all over social media), but it seems they're not quite done yet.

In honour of their 20-year kit deal with Nike, there's to be a special limited edition Barca shirt launched in the weeks ahead.

Footy Headlines, a website renowned for knowing a thing of two about football kits, tell us that the special 'mashup' shirt will be made up of different elements of iconic Barca home kits worn by the club over the last couple of decades. Not only that, they've also gone to the trouble of mocking up an image of what the shirt will supposedly look like using information they've received. 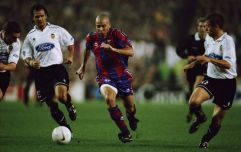 O Fenômeno: The story of Ronaldo's brief but brilliant whirlwind at Barcelona

END_OF_DOCUMENT_TOKEN_TO_BE_REPLACED

Footy Headlines also point out that leaked images of the Nike Barca Mashup collection's shin guards have also been leaked, seemingly confirming the design of the shirt.

As some will recall, Nike also attempted something similar to mark Arsenal's 20-year anniversary with them, shortly before the north London club's switch to Puma kits four years ago.

The Barcelona shirt - as was the case with the Arsenal mashup shirt - will not feature a shirt sponsor.  It's expected to be released at some point in October and, being limited edition, is expected to sell out extremely quickly.

You may also like
Football
Imagining a world without Lionel Messi at Barcelona
Sport
Barcelona and Real Madrid have lost their heads in pursuit of Neymar
Sport
Who is Kubo? The Real Madrid teenager embarrassing his teammates
Sport
In a world containing Messi, Neymar will never find what he's looking for
Sport
Matthijs de Ligt could snub Man Utd and Barcelona for Paris Saint-Germain
Next Page