It makes no sense and yet all the sense in the world. Real Madrid desperately want rid of Gareth Bale and his mammoth wages. Manchester United yearn a marquee signing on the 'cheap' with Borussia Dortmund showing no signs of gifting them a discount on Jadon Sancho. Recent reports claim it would 'only' cost £18.5m to secure the Welshman's signature. And most importantly Ed Woodward loves making a statement signing that brings in more noodle partners. But how would Bale at Old Trafford work out? Let's take a look-see...

END_OF_DOCUMENT_TOKEN_TO_BE_REPLACED

Manchester United will announce Bale's signing with a video of him sitting on a dragon in the Old Trafford centre-circle surrounded by daffodils and eating Welsh rarebit, whilst Bryn and Nessa sing Islands in the Stream behind him accompanied by a male voice choir. Daniel James will volunteer to be involved but no one will reply to his email.

Bale's first decent game will be greeted by journalists and fans alike claiming it was patently obvious he was going to be a success at Manchester United and how they didn't for one second subscribe to the idea that he was 'past it' - despite their Twitter history suggesting the opposite.

His first injury will be greeted by journalists and fans alike claiming it was patently obvious he was an expensive waste of money and quite clearly a vanity signing by Manchester United - despite their tweets a few days ago suggesting the opposite.

Bale will take up residency at Dunham Forest Golf and Country Club, where his nagging calf strain will not impinge on his favourite pastime. Whilst the fans grow increasingly frustrated at his lack of minutes on the pitch, Bale will simply laugh and moonwalk across the green. His caddy (Daniel James) will sheepishly apologise on his behalf and ask whether Ole has been in touch.

Growing increasingly miffed at the whole superstar signing not playing thing, Ole Gunnar Solskjaer will vent his frustrations to Ed Woodward, who will be far too busy tying up lucrative partnerships with Callaway and Advanced Hair Studio to give a shit.

In a case of belated karma, Bale will do an inverse-Giggs and always be available for Wales internationals whilst ruling himself out of action for United. Solskjaer will finally lose patience with the wayward Welshman and storm into Sir Alex Ferguson's office asking him what he should do about it. 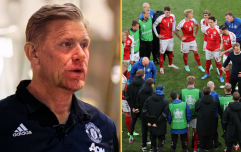 END_OF_DOCUMENT_TOKEN_TO_BE_REPLACED

Come January, with Bale having played a grand total of 112 minutes for United, Solskjaer will implore Ed Woodward to sign a player he actually wants. Woodward will finally relent and spend the entire winter transfer window monitoring the situation ahead of expressing an interest about liaising with intermediaries vis-à-vis Jadon Sancho. He'll end up signing Moise Kean on deadline day for £42.5m.

Following a sustained period of bad weather in the north of England, Bale will get bored and declare himself fit for first-team action. He will subsequently score a stunning free-kick against West Brom, leading to a throng of pundits claiming 'Bale is back'. Graeme Souness will question why Paul Pogba can't show a similar level of commitment and work ethic. In the next game, Bale will 'feel something go' coinciding with a warm front drifting in from the Atlantic.

Both the Daily Mail and the Sun will run stories on Mason Greenwood being secretly filmed playing crazy golf just two days before a United game and question why the millionaire footballer is so distracted from his day job. They will also criticise him for driving away in an expensive car he bought with his own money.

Following the end of the season, having finished fifth in the League, Manchester United will allow Bale to leave for Inter Milan whilst continuing to pay his wages in full. They will start the summer briefing the media that they are interested in signing Jadon Sancho - but only for £20m less than whatever Borussia Dortmund will accept.