Australia holds biggest sporting event since the beginning of COVID-19

Over 52,000 people were packed into the stadium

Australia has just held the most-attended sporting event since the onset of Covid-19 - a rugby league fixture between Queensland and New South Wales. 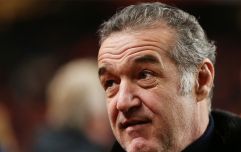 END_OF_DOCUMENT_TOKEN_TO_BE_REPLACED

The State Of Origin fixture is arguably the biggest occasion on the rugby league calendar. Despite Covid-19 and its decimation of live sporting events across the globe, the 2020 edition proved no different.

Over 52,000 people were jam packed into the Suncorp Stadium in Brisbane for the hotly-anticipated match-up.

END_OF_DOCUMENT_TOKEN_TO_BE_REPLACED

The attendance of 52,000 was a little greater than the 46,000 people in attendance last month for a rugby union match between New Zealand and Australia at Auckland's Eden Park. New Zealand won 27-7, although the All Blacks have stumbled as of late, losing to Argentina at the weekend.

Rugby league in Australia has provided the setting for most of this year's biggest sporting attendances.

37,303 were in attendance for the NRL Grand Final in Sydney, while 36,212 watched the Blues' game-two State Of Origin match in Sydney. In Aussie rules football, just under 30,000 people saw the AFL Grand Final at the Gabba.

END_OF_DOCUMENT_TOKEN_TO_BE_REPLACED

In Britain, authorities hope fans can return to the terraces at some point in December.

Football clubs have experienced financial turmoil since Covid-19 hit Britain, with EFL clubs on the receiving end of a bailout to prevent them from liquidation.

The government's culture secretary Oliver Dowden held a recent virtual summit with leaders from the FA, Premier League, EFL and anti-racism charity Kick It Out regarding a safe time-frame for allowing spectators back into stadiums.

popular
Praying man who said 'see you in heaven' tries to open door mid-flight
Incredible case of the only known individual whose parents were two different species
Knifeman spotted fleeing scene after OAP busker is killed
TikTokers are utterly convinced there is a secret zombie apocalypse going on in China right now
People want ‘offensive’ Crown Paints advert banned after attracting hundreds of complaints
Darius Danesh opened up about his health struggles before his tragic death aged 41
The FootballJOE Pub Quiz: Week 50
You may also like
News
Prince Andrew is now banned from public return at ancient ceremony after missing Jubilee 'due to covid'
Life
Spain to welcome back unvaccinated Brits 'within days' just in time for the summer holidays
News
Beergate: Labour denies Keir Starmer broke lockdown rules after memo leaked
Coronavirus
Severe covid can cause brain impacts equivalent to ageing 20 years, study finds
News
Horror as elderly man pulled from body bag alive moments before he was due to be cremated in China
Next Page