Williams' first match in almost three months ended with the defender limping off the pitch in agony when Wales played out a 0-0 draw with Mexico in an international friendly on Tuesday. 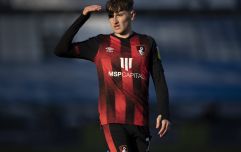 END_OF_DOCUMENT_TOKEN_TO_BE_REPLACED

The centre-half complained of pain in his midsection following a collision with Mexican striker Javier 'Chicharito' Hernandez and he was replaced by Tom Lockyer after just 20 minutes.

And Williams has since revealed the extent of his injuries, posting a photo of himself from his hospital bed after successful surgery on a punctured lung.

The 33-year-old, who was making his first appearance since he featured for Everton against Burnley on March 3, also suffered broken ribs in the collision.

"[A] crazy couple weeks.. great to be back in a Wales shirt and with the lads, however after coming off after 20 mins with multiple breaks on two ribs, I went hospital & found out I had punctured my left lung which led to it collapsing," Williams wrote on Facebook.

"I would like to say a huge thank you to all the staff at Ronald Reagan UCLA hospital in Beverley Hills for looking after me and making sure surgery went as comfortable as possible. Look forward to flying home and resting up now before the new season!"

popular
'Can I get my coat?' Chilling arrest footage of woman on trial for stabbing husband
Insulate Britain demand motorway speed limit reduction to 10 MPH
Griezmann shown straight red card for catching Roberto Firmino with high boot
Everton footballer has bail suspended until January
Woman starts driving over Insulate Britain protestor in furious standoff
NHS doctor facing deportation because 'she can't speak English'
Video shows teens joyriding steamroller through a housing estate
You may also like
Sport
World Rugby to ban matches featuring red and green kits to avoid colour blind clashes
Sport
Wales FA reveals plan to transform national side into one of 'world's great footballing nations'
News
People demand dragon on Welsh flag be given a penis
News
The UK beaches set to be wiped out in 30 years due to climate change
Life
Archbishop of York urges all UK nations to sing God Save the Queen before matches
Next Page