Former Arsenal boss Arsene Wenger is calling for radical changes to be made to the laws of football.

END_OF_DOCUMENT_TOKEN_TO_BE_REPLACED

Wenger, now Fifa's Head of Global Development, has spoken of his desire to make significant tweaks to the offside law, as well as a rule which would see some throw-ins replaced with kick-ins.

"I would like it to be that there is no offside so long as a (single) body part which a player can score with is in line with the defender," he told L'Equipe [via GFFN].

"This could be too much of an advantage for an attacker, because that obliges the defenders to play higher up."

He also outlined how he believed a throw-in could, at times, be a disadvantage for a team, prompting him to suggest an alternative.

"I would also like to change the throw-in rule: five minutes before the end, a throw-in for you should be an advantage, but in these situations you are facing 10 outfield players in play, whilst you only have 9," he explained.

"Stats show that in 8 out of 10 of those throw-in situations, you lose the ball. In your half of the pitch, you should have the possibility to take a kick instead.” 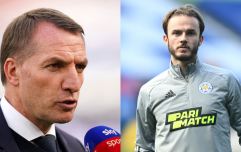 END_OF_DOCUMENT_TOKEN_TO_BE_REPLACED

Wenger is widely credited with revolutionising English football with the introduction of his innovative approaches to coaching following his arrival at Arsenal in the 1990s.

If he gets his way at Fifa, he will be changing the way the game is played in every corner of the globe.

popular
PGMOL issue explanation after Cavani goal disallowed due to McTominay 'foul'
Jose Mourinho launches attack on Solskjaer in response to "conning" remark
A definitive ranking of every swear word from worst to best
BBC and ITV viewing figures plummeted during blanket coverage of Prince Philip
These are the only 6 ways you can ever leave the pub
Police called to Harry and Meghan’s home nine times in as many months
Brendan Rodgers condemns Leicester trio for breaking Covid regulations
You may also like
Sport
Marouane Fellaini linked with José Mourinho reunion at Tottenham
News
Police investigating 'misuse of fireworks' outside Celtic Park
Sport
Joleon Lescott mocked by Man Utd fans for mixing his dates over RvP goal
Sport
Harry Kane expected to push for Tottenham exit if they miss out on Champions League
Sport
Man Utd players "had their own unit" with England, David James and Joe Cole recall
Next Page