Antoine Griezmann: Uruguay will be boring and fall over like Atlético Madrid

Uruguay are definitely the Atlético Madrid of international football 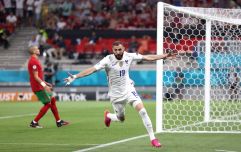 Both of Karim Benzema's goals vs Portugal were scored on the 46th minute, 44 seconds

END_OF_DOCUMENT_TOKEN_TO_BE_REPLACED

It should therefore come as no surprise that an Atlético Griezmann has compared his club side to Uruguay, whom he will face in the World Cup quarter-final with his native France.

However, the way Griezmann spoke about Uruguay and Atlético sounded less than complimentary, although that depends on what you consider to be a compliment.

Speaking to reporters about France's next challenge in this World Cup, Griezmann said: “Uruguay will be like Atletico, they will take their time, fall, go to the referee."

“We will have to get used to that because the match will be boring and they will want to bring us into that," he added.

Griezmann believes Edinson Cavani will be Uruguay's biggest threat in the quarter final, although the PSG forward limped off the field last night, with the help of Cristiano Ronaldo.

"He's the best forward according to my thinking.

"He makes 10,000 decisions, works for the team, and if he's injured they will change a lot, he got both goals [against Portugal].”

popular
Neighbour cuts tree in half in classic display of British pettiness
Transgender runner CeCe Telfer ruled ineligible for Olympics
Britney Spears tells court father won't let her remove birth control
Both of Karim Benzema's goals vs Portugal were scored on the 46th minute, 44 seconds
University LGBT society disbanded after arguing feminists need to be 'reeducated' in gulags
A definitive ranking of every swear word from worst to best
Sex expert says these are the four words you should always say in bed
You may also like
Sport
Roy Keane bemused by "child-like" Rudiger's bite on Pogba
Sport
When Roy Keane calls a tackle "an assault", you know it must be bad
Politics
Boris Johnson ridiculed for flying to Cornwall for climate change talks
Sport
Kylian Mbappe so angered by Olivier Giroud comments he wanted to hold press conference
Politics
Emmanuel Macron slapped in face while greeting people on presidential tour
Next Page