Angel Di Maria seems set to leave Paris Saint-Germain this summer, after it was reported by Superdeporte that newly appointed coach Thomas Tuchel would prefer to keep Gonçalo Guedes.

Guedes has spent the last year on loan at Valencia. Under the guidance of Marcelino, the young forward scored six goals from the left of midfield and fought his way into the Portugal squad for the World Cup. 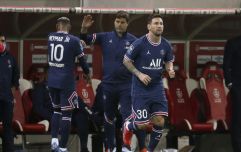 END_OF_DOCUMENT_TOKEN_TO_BE_REPLACED

That form in La Liga has caught the eye of Thomas Tuchel, who has decided to keep him at PSG, much to the disappointment of Valencia's board, who were in Paris this week to discuss the possibility of keeping Guedes for another season.

Tuchel's desire to keep hold of Guedes will likely spell the end of Angel Di Maria. The Argentine seemed to have finally found a home at PSG, until they signed Neymar from Barcelona, demoting him back down to the bench.

One woud expect there to be several takers for Di Maria, even in the Premier League, despite his failed spell at Manchester United. However the winger is likely to prefer a move back to Spain. Could a swap deal with Valencia be on the cards?