His career has been blighted by injury

Former Chelsea and AC Milan striker Alexandre Pato has been linked with a sensational return to English football with Championship outfit Birmingham City.

The 31-year-old is currently a free agent after his Sao Paulo contract was terminated by mutual consent back in August.

Reports emerging in Italy now suggest that Birmingham, managed by former Real Madrid star Aitor Karanka, could be set to offer the Brazilian a route back into English football.

Karanka is keen to add new faces to his squad, even after the closure of the transfer window. Birmingham have already added former Athletic Bilbao midfielder Mikel San Jose to their squad.

Italian newspaper Calciomercato report that the Blues face stiff competition to land Pato, with Serie A sides Genoa and Spezia also vying for his signature.

Birmingham are in dire need of some firepower up top. Relying mostly on target man Lukas Jutkiewicz, they currently sit in 17th place in the Sky Bet Championship. They've scored just three goals in seven games so far this season.

Pato burst onto the scene at Internacional in his native Brazil. There, he bagged six goals in 10 games, before signing for AC Milan, then under the stewardship of Carlo Ancelotti.

In the six years he spent with Milan, Pato's time was marred by injury, but he still managed to score 51 times in 117 games. That tally includes this sensational strike scored after just 24 seconds against Barcelona in the Champions League.

⚡️ @AlexandrePato ⚡️
Which current #UCL star is most likely to score a goal like this? pic.twitter.com/ITGqqEtcUy 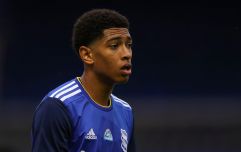 END_OF_DOCUMENT_TOKEN_TO_BE_REPLACED

Pato joined Corinthians in 2013, but struggled with injuries and a lack of form in front of goal. He went on loan to Sao Paulo, and then to Chelsea in January 2016.

Although he scored on his debut, the Brazilian only made two appearances in total at Stamford Bridge.

A disappointing spell with Villarreal was followed by a prolific two years in China with Tianjin Quinjan. There, Pato netted 30 times in 47 games.

He returned to Sao Paulo for the 2019-20 season but left the club at the end of the campaign - scoring five times in 20 games.

popular
The JOE Friday Pub Quiz: Week 220
QUIZ: Can you match the Harry Potter quote to the character that said it?
A definitive ranking of every swear word from worst to best
Emilia Clarke's nude scene set 'Game Of Thrones' fans on fire
Boxer Ryan Garcia bets $100,000 on Conor McGregor not being able to knock out Jake Paul
QUIZ: Guess the football stadium from the photo
Kaka calls out Sunday league player who told him to 'cut it back'
You may also like
Sport
Coventry City: A season of away days
Sport
Aston Villa are set to secure their first signing of the summer
Sport
Lukas Jutkiewicz dresses as himself in full Birmingham kit on stag do flight out of Stansted
Sport
Three more Championship clubs facing points deductions over breach of spending rules
Sport
Birmingham City deducted nine points for breaching Football League spending rules
Next Page