Terry concocted a plan to get himself substituted in his final game for Chelsea, leaving the pitch after 26 minutes of the champion's 5-1 win over Sunderland at Stamford Bridge.

The Chelsea players formed a guard of honour for the 36-year-old, as he hugged his teammates, the Chelsea staff and his opponents, and took the applause of the crowd. 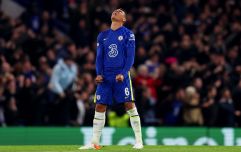 END_OF_DOCUMENT_TOKEN_TO_BE_REPLACED

It was a peculiar scene. It might be the first and last time a Premier League game is stopped in the first half for a pre-planned substitution in order to give a departing player a guard of honour.

Some found it embarrassing, and that was before David Moyes admitted that he catered for the scene by agreeing beforehand to instruct his team to kick the ball out of play after 26 minutes.

The pundits on Match of the Day were divided on the merits of Terry's elaborate Chelsea exit.

"I don't know if I'd disagree, but Sunderland are down, they're (Chelsea) champions - you know," the former Arsenal striker said.

However, the incident didn't seem to sit well with Alan Shearer.

The former Newcastle United striker complimented Terry on a fantastic playing career, but appeared to find his staged exit to be in bad taste.

"First of all (Terry) has been an absolute giant of the Premier League, 717 appearances, 15 trophies, but I'm not sure about this.

"Sunderland agreeing to kick the ball out on 26 minutes, I don’t think anything should be done that could undermine the integrity of the game.

"I know it was done with good intentions and he deserves the guard of honour, but it should have been before or after the game or in the last minute."

A lot of football fans might agree with the BBC pundit's view.