Adult man steals ball from small child at baseball game, but it's not quite as it seems

At some stage in recent memory, you may have come across a clip of a Chicago Cubs fan seemingly stealing a baseball that had been thrown to a young fan in the crowd at Wrigley Field.

It was rage-inducing stuff...

When going to a baseball game, DON'T be this guy. pic.twitter.com/pAeiRN6Q2X

The clip soon went viral and even came to the attention of staff at the Cubs, who gave the kid in question a baseball autographed by infielder Javier Báez to make up for his apparent disappointment.

As it turns out, the man who 'stole' the ball wasn't as bad as he had initially seemed. 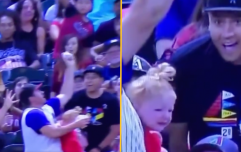 END_OF_DOCUMENT_TOKEN_TO_BE_REPLACED

A Reddit user named 'btbrian' did a bit of digging and found out that, according to fans who were sat close by (see below) that he had already given a ball to the young child sitting in front of him and gave other balls that came his way to fans in his vicinity.

He had already helped that kid get a ball. He gave two more away to kids also. He was a great guy. TV got this all wrong.

I was sitting next to this guy. That ball was between my feet. The kid already had a ball the same guy helped him get. He handed it to his wife. She took a picture of it and they gave it to the kid next to them. This guy was great. This story is BAD.

I was sitting the next to the boy and the same fan helped him snag a ball a few innings before this.

His generosity has been acknowledged by the Cubs themselves, as was confirmed by local sports anchor David Kaplan on Monday.

I spoke with people from the Cubs. The man who grabbed the ball on the widely seen video had actually already helped the little boy get a ball earlier. The young man has a game used ball and a Javy Baez ball. All is well. Guy is A-OK so let it go people.

popular
Men should ejaculate 21 times per month to reduce cancer risk
Pizza Hut customer outraged over 'sexual' ketchup label that reads 'shake, squeeze and squirt'
Putin labels West 'monstrous' for teaching children they can change gender
Jeremy Clarkson says 'f**king government' will 'c**k everything up' as he collects award
Manchester United will never get better under Ole Gunnar Solskjaer
Here's how to see who's been taking screenshots of your Instagram Stories
At least seven bodies have been found in search for Brian Laundrie
You may also like
Entertainment
QUIZ: How well do you know The Simpsons' famous softball episode?
Entertainment
The best movie about modern day sports is now on Netflix
Sport
American baseball star signs biggest sporting contract of all-time
Entertainment
Baseball documentary follows Team Israel as they go from underdogs to all-stars
Sport
World Series trophy broken by beer can thrown by fan during Red Sox parade
Next Page