It's only available for 48 hours

It wasn't a dream, it actually did happen. Yesterday reigning champions Germany were knocked out of the World Cup at the group stage for the first time since 1938.

And with half of the 32 teams making their way home by the end of the day, Adidas has decided to offer a discount on the exiting team's official team merchandise - meaning that you save yourself some money on Germany's lush kits if can find a way to get it shipped across from America.

Using the discount code GMNY30, you can get 30% off Germany’s official home and away jerseys, shorts, scarves, balls and training gear on adidas.com.

The fallout from Germany's exit has been pretty hilarious, for neutrals at least, although it has been stoking some of the worst Brexit tendencies in the British media.  Despite their mediocrity across the board, there was one particular player in the German squad who has been singled out for his poor displays, Mesut Ozil. 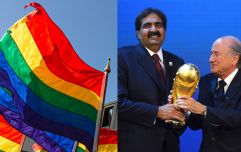 END_OF_DOCUMENT_TOKEN_TO_BE_REPLACED

In the aftermath of the Mexico defeat, Ozil was dropped against Sweden, before being reinstated in what was an insipid and uninspired performance against South Korea.

His manager has not been one of those to criticise him, however, and has even jumped to his defence, saying that criticism of him alone is harsh, considering how poorly the entire team played. Either way, the squad’s on the plane home today.

popular
Inter Milan planning controversial change to club name and badge
Deep fake meme lads sing sea shanty that will make you want to abandon your childhood sweetheart and circumnavigate the globe
Woman left with chemical burns after confusing fireworks for sweets
Matthew Perry's dad was a character on Friends and nobody noticed
"Djokovic is a tool" - Tennis world turned upside down in day of days
Men who lost weight during lockdown share their diet and workout plans
Boris Johnson facing backlash over handling of Universal Credit cut
You may also like
Sport
Qatar 2022 World Cup schedule announced by FIFA
Sport
QUIZ: Can you name the three men to have pulled off this rare World Cup feat?
Sport
Five years on, Germany's demolition of Brazil in the World Cup remains as brutal as ever
Sport
QUIZ: How well do you remember the 2018 World Cup?
Sport
Scotland defeat Ireland in final of darts World Cup
Next Page