The club might be in a mess, but at least the kit is nice

As a wise man once said, there's only so much you can do with stripes. You have to sympathise with kit manufacturers who are tasked with remaking stripy kits every season. 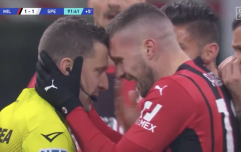 END_OF_DOCUMENT_TOKEN_TO_BE_REPLACED

But Puma, who have taken over from Adidas as AC Milan's kit manufacturers, have smashed it out the park with their latest design for the San Siro club.

It's the first time a Milan kit has not been made by Adidas since 1998.

They've kept it simple but classy by adding a collar, with your average width stripe. No nonsense. No gradients, no ridiculously thin stripes, no gold. Just red and black, as it should be.

You'll almost definitely see this bad boy being worn at Wireless Festival this weekend, along with thousands of Nigeria shirts.