A moment to remember

A baby's first words are something usually treasured for life. Though ‘mama’ and ‘dada’ tend to be the prevailing choices, there are some strange ones out there that seemingly make babies internet stars before even standing up for the first time.

Nine-month-old Bode was just babying around when his babbles started to form semi-coherent sentences. Parents Carmen Bish, 22, and Keiren Parsons, 26, were lucky enough to catch their baby's first words on camera.

After a few baby sounds, it appears as if Bode is going to speak - and then he does. However rather than the usual first word choices, Bode chooses to go with “Alright bruv”, which has to be the most 2021 thing ever.

Bish from Kent said: “Bode, Keiren and I were just chilling together. He was on his changing table chatting away so I got my camera out and filmed him.

“We didn’t even notice at first! We were showing my parents the video and I thought I heard him say something, so I played it again and we all burst out laughing.” 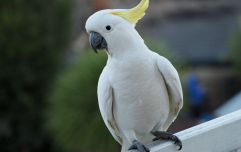 END_OF_DOCUMENT_TOKEN_TO_BE_REPLACED

Already, Bode is showing the world how much of a standout kid he is. While others his age were mumbling and fumbling around, Bode is out there making moves and snagging headlines.

After showing the video to family members, Bish said: “I literally made a TikTok account Saturday morning, posted it and then deleted the app.

“On Monday, Keiren went into work as usual and his work colleagues mentioned that the video has about 50k views.

“He came home and told me, so I decided to download the app again. By the time I’d checked, it was up to one million views!”

Another said: “Get him a man bag and a puffer jacket.”

Watch this space because Bode is now on the path to internet sensation.