Basically, can you remember how to spell the names of those Dutch defenders?

It wasn't the best World Cup. Only David Villa and Diego Forlan seemed to be able to strike the ball properly, England were terrible, and every game was played to a chorus of humming vuvuzelas. 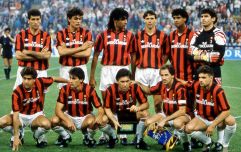 END_OF_DOCUMENT_TOKEN_TO_BE_REPLACED

The final wasn't great either, as the tense, cagey affair lagged on for 120 minutes. But it did feature one of the worts tackles and one of the most dramatic tackles of all time, at least.

But do you remember the 22 players who started the game? Alternatively, do you know how to spell those Dutch defenders' names?

FYI: Spanish players known by their first name only require that name to get the answer right. Dutch players with multiple word surnames do not require first names to be entered to get the correct answer.

I've done this due to Sporcle's strange coding, and to save you typing in first names.