QUIZ: How well do you know The Lord of The Rings movie saga?

Hard to believe it has been 18 years since The Lord of the Rings: The Fellowship of the Ring came out.

As of December 19 2019, it has been 18 years since The Lord Of The Rings: Fellowship Of The Ring was released in cinemas. It's all grown up. All these years later, it and the two movies that followed it - The Two Towers and The Return of The King - are still regarded by many as the greatest movie trilogy of all time. 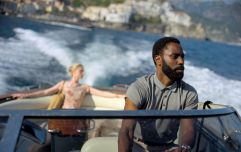 QUIZ: How well can you remember the movies of 2020?

END_OF_DOCUMENT_TOKEN_TO_BE_REPLACED

It's not hard to see why either. Epic battle scenes, unforgettable characters, some of the greatest cinematography of all time and CGI that still holds up incredibly well.

To celebrate the fact that the iconic series is turning 18, we thought we'd test your knowledge a bit. Have a go at the quiz below to see whether you should be branded a fool of a Took or the indisputable King of Gondor.