Yvette Cooper amendment to delay Article 50 defeated in the Commons

An amendment to Theresa May's statement to the House of Commons on Brexit was defeated on Tuesday evening.

The highly significant vote, nicknamed after its principal the Yvette Cooper amendment, would force the delay of the Article 50 process if no Brexit agreement was reached by February 26.

Later in the night, MPs voted in favour of the so-called Brady amendment to replace the Irish backstop with "alternative arrangements."

It essentially gives parliamentary support to the prime minister to try to "re-open" the draft withdrawal agreement with the EU with the intention being to seek "alternative arrangements" to the Irish backstop.


What changes the EU would ever agree to remain to be seen. Particularly on the backstop, where there is no obvious reason for the bloc to act against the interests of one of its members, Ireland, in changing the backstop. 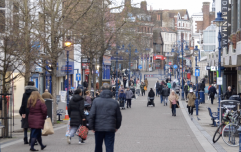 Brexiteers have won, what do they want now?

END_OF_DOCUMENT_TOKEN_TO_BE_REPLACED

This all may seem confusing, particularly to those who were listening to Theresa May on December 4 when she told the Commons the withdrawal agreement "cannot be re-opened."

She said: "Given the rigorous fight that we had in the negotiations to  ensure that there were certain elements that were in the interests of the UK, notably around fisheries and other issues, I caution honourable members that not only has the EU made it clear that the withdrawal agreement cannot be reopened.

"We have agreed the deal and the deal is there but it is not the one-way street that honourable members would perhaps wish it to be."

Another tepid day at Westminster.


popular
QUIZ: Identify the brand from just its slogan
Here's the full list of McDonald's reopening this week
The JOE Friday Pub Quiz: Week 193
Here's what they don't tell you about being a contestant on Pointless
WATCH: Muhammad Ali's perfect reply to being told 'not all white people are racist'
Boris Johnson challenged to say 'Black Lives Matter' in parliament
21 British game shows ranked from worst to best

You may also like
Politics
Over and out - Brexiteers celebrate Brexit Day in Parliament Square
Politics
The child refugee separated from his only living family member
Politics
What does a Tory landslide mean for the future of Northern Ireland?
Politics
Drillminister has a warning for our new prime minister
Politics
Is the United Kingdom now a right-wing country?
Next Page