If you've never heard of James O'Brien, where have you been? 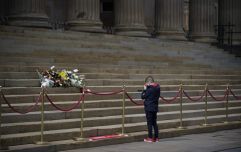 Why the city of Liverpool will never forgive The Sun

END_OF_DOCUMENT_TOKEN_TO_BE_REPLACED

Dangerously empathetic, it's almost as if the talk show host cares about his fellow human. In debate he has a subversive habit of applying logic to arguments and basing opinion on fact - it's almost as if he doesn't have a bone of prejudice in his body!

The man has an unhealthy relationship with the truth, exposing it like some kind of weirdo, wearing veracity under his trench coat. He is unrelenting on that JOE podcast and Newsnight, which coincidentally he stopped doing six months ago but we won't let that get in the way of an opportunity to attack the BBC.

He has an insurrectionary knack for keeping his interviewees on topic.

The dissident journalist is a menacing threat to piss-poor papers and the people who own them.

They are rightly scared.