Lord Buckethead to stand against Nigel Farage in European elections

The hero we deserve

One of the breakout stars of the 2017 general election was Lord Buckethead - the intergalactic spacevillain who stood against Theresa May in Maidenhead.

Lord Buckethead may have only received 249 votes, but he stole the heart of the nation.

"Lord Buckethead" and "Elmo" took votes away from the current Prime Minister of the UK pic.twitter.com/FEjvhKxIy4

Since 2017, of course, British politics has only got more insane. And as the UK is about to have an election for the European Parliament - despite the fact we are supposedly meant to be leaving the European Union - it is time to Buckethead to rise again.

On Friday even, he announced he would be running against Nigel Farage

BREAKING NEWS: Since so many have begged me to run against Nigel Farage in the EU Parliament Election on 23 May, a clever Earthling set up this link for you to fund the cost of the pricey deposit. Will I agree to run if the goal is met? MY ANSWER: YES! https://t.co/dEksIF278U pic.twitter.com/Lq19e2SNk2 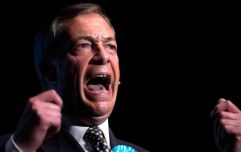 END_OF_DOCUMENT_TOKEN_TO_BE_REPLACED

In a tweet, Buckethead said that "so many have begged me to run against Nigel Farage in the EU Parliament Election on 23 May" - and that a GoFundMe had been set up to cover the cost of the deposit required to stand.

In 2017, Lord Buckethead's manifesto included such promises as "Ceefax to be brought back immediately," the "nationalisation of Adele," and "Katie Hopkins to be banished to the Phantom Zone".

He also showed up at Glastonbury to introduce Sleaford Mods.

Buckethead - or at least someone wearing the costume - has also stood against Margaret Thatcher in 1987 and John Major in 1992.

He takes his name from the villain of a low-budget 1984 sci-fi comedy called Gremlins - or sometimes known as Hyperspace, or also Gremlords.