It is safe to say, he does not like migrants 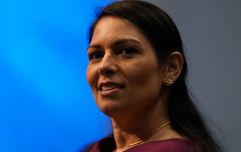 END_OF_DOCUMENT_TOKEN_TO_BE_REPLACED

Discussing the increase in number of migrants attempting to cross the Channel over the Christmas period, Andy lamented the state of Britain under Tory austerity, with many families living in or on the edge of poverty.

He argued that the UK should be more concerned about taking care of its own, but that argument took a shocking turn when it came to the plight of migrants.

Tom Watson: "You've got a boat load of kids sinking in the English Channel, what would you do with them?"

Tom Watson: "So you would let children drown in the English Channel?"

Andy: "As many as it takes to stop them."

Tom Watson: "You leave me worried for the future of humanity with views like that."

popular
How did Brian Laundrie’s parents find his remains in a few hours?
Taliban 'behead junior volleyball player and post photos of her head on social media', report says
St James' Park to get new name under Newcastle new owners
The JOE Friday Pub Quiz: Week 266
Real life Squid Game coming to UK and you have to sign a 'medical disclosure' to play
Alec Baldwin asked 'why was I handed a loaded gun?' after fatal on-set shooting
Producer says Alec Baldwin should be charged with manslaughter over accidental shooting
You may also like
News
Mum paralysed by stroke after M25 protest delayed trip to hospital by six hours
News
Bereaved dad brings James O'Brien to tears while blaming Boris for daughter’s death
Entertainment
David Lammy dismantles caller's argument after they claim he can never be English
News
Keir Starmer criticised for failing to call out white supremacist myth on radio phone-in
News
James O'Brien pulls apart Dominic Raab comments in gruesome takedown
Next Page