Come on Jacob, step forward and condemn Boris Johnson if you're the Christian you claim to be

A case of one affair too far for Marina, so well-travelled (and charted) is Boris' Johnson.

So now we need only await Jacob Rees-Mogg's condemnation. Being the good Christian that he is:

Jacob Rees-Mogg is opposed to gay marriage and abortion – even after rape pic.twitter.com/zFWFQitDen

A man who holds his religion so dearly, allows it to inform his ethical standing on serious issues that affect other people - crucially not himself. Will this man stand up and condemn his parliamentary colleague for breaking one of the 10 commandments, thou shalt not commit adultery?

No. No he won't. Because Rees-Mogg's beliefs last as long as the burning wick takes to reach his fingers. He doesn't mind profiting from the sale of abortion pills, for instance. 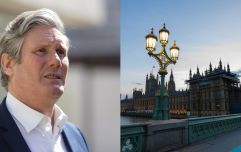 Keir Starmer pledges to clear up corruption in Westminster

END_OF_DOCUMENT_TOKEN_TO_BE_REPLACED

In this case, Boris' philandering will almost certainly be forgiven. The committment of the Somerset Tory's Catholicism is absolved by political ambition. Or, shall we call it, the recognition of a higher power.

Jacob knows his route to cabinet is paved by the blonde father. It's why he recently tapped Johnson as a possible Prime Minister.

"I think Boris is absolutely first class, but there is no vacancy."

Let us see the strength of his conviction.