Prime Minister Boris Johnson has responded in-sorts to the immense criticism he received for not wearing a mask while sitting next to 95-year-old David Attenborough whilst at COP26 in Glasgow.

Boris Johnson tries to explain why he wasn't wearing a mask while sitting next to Sir David Attenborough. 🤦#COP26 pic.twitter.com/hW1wpNbPHU

Photos emerged of the PM on Monday (November 1) that appeared to show him literally sleeping on the job. Though Downing Street has denied the claims, people were quick to question why Johnson was not wearing a mask while everyone around him was.

The point of wearing a face mask is mainly to protect those around you. It shows you care for others. Johnson not wearing one, especially sat next to a national treasure like Attenborough says it all. pic.twitter.com/Fq8QO0DcKB

Christiane Amanpour from CNN quizzed Johnson on why he wasn’t wearing a mask while so close to a “national treasure”.

“Do you want to answer what’s going on around social media?” she asked.

That moment when @camanpour asked why Johnson wasn’t wearing a mask next to David Attenborough and his mask slipped, the hate in the eyes. pic.twitter.com/tjY52KLo58 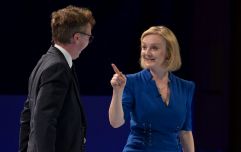 END_OF_DOCUMENT_TOKEN_TO_BE_REPLACED

Amanpour asked the question numerous times as the PM appeared bewildered, looking from side to side before stuttering briefly.

“It’s all over the place,” she confirmed.

“That’s the approach we take.”

Let’s just say the internet wasn’t too pleased with Johnson’s reply, with one user outright calling him an "inconsiderate t***er".

This is but one of many instances where Tory MPs have been pictured not wearing a mask. Last month, senior Tory MP Jacob Rees-Mogg said Conservative MPs do not need to wear face masks in the Commons chamber because they know each other and have a “convivial fraternal spirit”.

Not 24 hours before Rees-Mogg’s statement, Health Secretary Sajid Javid said that government officials should be setting an example for the general public.

popular
Groom shocks wedding by playing video of his bride cheating with her brother-in-law
SeaWorld responds after footage showing killer whales attacking each other leaves visitor in tears
Man has hand 'chopped off' outside working men's club in attack like 'a horror film'
Some Stranger Things fans are now trying to cancel Metallica
Microphone picks up fiery spat between Tom Newton Dunn and Liz Truss following leadership debate
Brexit is turning Britain into an 'emerging market economy', sobering new analysis suggests
FIFA consider moving start date of 2022 World Cup
You may also like
Sport
Calls for a Bank Holiday following Lionesses EUROS win
News
Nadine Dorries criticised for retweeting image showing Boris being stabbed in back
Politics
Stanley Johnson snaps after Boris is called 'a liar' live on TV
News
Boris Johnson ‘does not want to resign’ and ‘wished he could carry on’ as PM, claims Tory pal
Politics
The Home Office wants to effectively decriminalise drugs
Next Page