Farewell Toys R' Us, you were too pure for this cruel world. And you have no money.

It has just over a month since Toys R' Us announced that it would be entering administration - sad news, yes, but with the added bonus that we could all avail of ludicrous discounts and relive our youth one last time at cut-price rates. 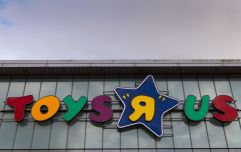 END_OF_DOCUMENT_TOKEN_TO_BE_REPLACED

We've already reported that some toys were available for as little as 6p, which we have to assume you have already taken advantage of to an obnoxious degree.

It has now been revealed though that you have less than two weeks to continue to take advantage of this state of affairs, as the iconic high street chain will officially close its doors on April 24.

25 chains of the store have already shut down, with the further 75 set to close in 12 days time.

That is just 12 days to get down there and avail of half-price action figures, strollers and bikes, as well as myriad other offers on thousands of products for your kids or - more likely - yourself.