A sad video has gone viral in India, which seemingly shows the moment a son got on his knees and begged the Uttar Pradesh police to not take away his mother's oxygen tank. 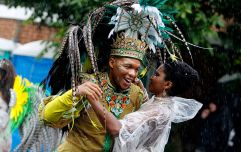 Notting Hill Carnival cancelled for second year due to Covid

END_OF_DOCUMENT_TOKEN_TO_BE_REPLACED

His 53-year-old mother, Usha Goyal, who was admitted to hospital for Covid-19 complications, sadly died two hours after the police are alleged to have taken away her oxygen cylinder.

The woman's 22-year-old son, Anmol Goyal, begged police outside the private Upadhyay hospital in the city of Agra, before saying: "My mother will die if you take away her oxygen cylinder."

"The only thing that the doctor said would help her, an oxygen cylinder, was taken away from us," Goyal told the local news outlets in India.

The journalist who filmed the footage claimed that the Uttar Pradesh police took the oxygen cylinder away in order to give it to a VIP, as reported by the Independent.

The 22-year-old told the local media that when he knew what was happening, he attempted to stop the men but was left with no choice. The woman's son fell to his knees and exclaimed: "My mother will die."

भईया मेरी मां चली जाएगी... A man cried and begged policemen not to take away the oxygen cylinder he arranged for his mother in critical condition.

The cylinder was reportedly confiscated from private hospital in Agra to supply it for a VIP. (1/2) pic.twitter.com/OHjR5Xvhcj

END_OF_DOCUMENT_TOKEN_TO_BE_REPLACED

Speaking to the Wire, Goyal said: "When I asked the ward boys why they were taking away our oxygen cylinder, they told me that they want to save somebody’s life. Who is that somebody? And is my mother’s life not valuable enough?"

Goyal’s younger brother, Ansh, bought a regulator after realising that his mother would need one for the oxygen cylinder to function.

The pair placed the oxygen tank at the side of their mother’s bed in the private hospital, as reported by the Independent. However, doctors told Ansh and Anmol that the hospital had run out of oxygen.

As reported by the Independent, one doctor told the Goyal brothers: "If you have any contacts, you will know how to arrange one."

Usha Goyal's oxygen was taken away and two hours later, she sadly passed away. 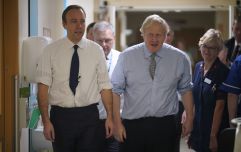 END_OF_DOCUMENT_TOKEN_TO_BE_REPLACED

The Agra Police denied the claims of the Goyal brothers that the oxygen cylinder was taken away from their mother.

Rohan P Botre, Superintendent of Agra Police said, “It was an empty cylinder being taken away from the hospital for refilling.”

This comes after the number of Covid infections in India has exceeded 18 million.

As a result of the Covid-19 crisis, oxygen supplies and hospital beds in the country are in massively short supply.

popular
The JOE Friday Pub Quiz: Week 248
700-pound George Floyd statue unveiled in US
Crystal Palace footballer is one of four British women suing Pornhub
Southgate explains why he didn't move Coke bottles like Ronaldo
Daredevil Alex Harvill dies attempting world record motorcycle jump
A definitive ranking of every swear word from worst to best
Women aged between 18 and 50 told not to drink alcohol by World Health Organisation
You may also like
News
Children 'may need to get Covid jabs to avoid disrupting education'
News
'Freedom Day' has been delayed by 4 weeks, PM confirms
News
Covid: Final stage of lockdown easing in England to be delayed by a month
News
One month delay to end of lockdown restrictions being considered
News
Scientist says 'lockdowns are the single biggest mistake in history'
Next Page