A statement released by the Ligue 1 club on Monday morning confirmed the news, although the circumstances of Gomis' death, which occurred on Sunday, are not yet clear.

Some reports in France have claimed the 19-year-old died after being shot with an AK47 while on the streets of La Seyne-sur-Mer. It is also said that a 14-year-old boy died at the scene, where police found 24 Kalashnikov cases.


Gomis' death comes weeks after one of his brothers also reportedly died as a result of gunshot wounds. 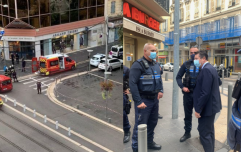 END_OF_DOCUMENT_TOKEN_TO_BE_REPLACED

The young defender spent five years with Saint-Etienne but left in the summer despite reports that he had been offered a new contract by the club. Despite never making his bow for the senior team, he captained Saint-Etienne's B side regularly throughout last season.

'AS Saint-Etienne had the immense sadness to learn of the tragic death of William Gomis, which occurred last night,' the Ligue 1 club's statement reads.

'Appreciated by his former team-mates and educators for his human qualities, the young player, who would have turned 20 in December, did all his training at the club where he had arrived at the age of 15.

'The club's leaders, coaches, players and employees are deeply affected by William's sudden death and offer their deepest sympathies to his family.'