WhatsApp went down and everyone lost their shit over it 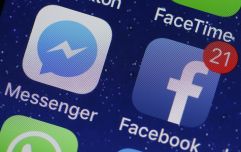 END_OF_DOCUMENT_TOKEN_TO_BE_REPLACED

People were unable to send or receive messages on the app.

Website Down Detector showed that much of Europe, the United States and South America suffered outages.

When users attempted to send a message, they were faced with the timer symbol rather than the customary ticks of a sent message.

For all those worrying, she probably was trying to reply to you at this instant and she does actually like and is completely not ignoring your messages... probably.

People lost their shit on social media over the drop in service, but thankfully normal service has resumed.

#WhatsApp is down. The world right now: pic.twitter.com/lQzA5WnLt1

Don't listen to this girl... she probably is trying to message you.

Lads chill out ... no one is messaging you #whatsappdown

popular
Man Utd defend decision to make 10 minute flight to Leicester for Premier League clash
Shocking footage shows moment man is killed by his own brothers
Addison Rae banned from TikTok
Jurgen Klopp takes another dig at BT Sport for lunchtime kick-off
The Batman trailer has just dropped and it looks absolutely unreal
Megan Fox reveals graphic sex confession about Machine Gun Kelly
The JOE Friday Pub Quiz: Week 265
You may also like
Social Media
Bride asks guests to pay per slice of cake eaten at wedding
Tech
Mark Zuckerberg slammed for his apology on social media blackout
Tech
The funniest memes to come out of the Facebook, Instagram and WhatsApp crash
Tech
The Facebook, Instagram and WhatsApp crash explained
News
Sadiq Khan: I don't have WhatsApp, neither should Boris Johnson
Next Page