Theresa May has slammed Fifa for their decision to reject a request from England and Scotland players to wear armbands featuring poppies when the two sides meet on Remembrance Day.

Speaking at prime minister's questions, May said that it was "utterly outrageous" that Fifa had decided to turn down the request, adding that footballers should be able to show their respects for those that died protecting their country.

“Our football players want to recognise and respect those who have given their lives for our safety and security and I think it is absolutely right they should be able to do so.”

May also goes on to tell Fifa, who have been embroiled in a long-running corruption scandal, that they should be more concerned with their own affairs.

“I should say to Fifa before they start telling us what to do they jolly well ought to sort their own house out."

Theresa May slams #Fifa on poppy ban during #PMQs pic.twitter.com/dIq6EnO61C 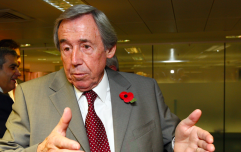 END_OF_DOCUMENT_TOKEN_TO_BE_REPLACED

Fifa usually bans commercial, religious and political messages on football shirts, although made an exception five years ago. On that occasion, Prince William and David Cameron appealed to world football's governing body so that each team would be able to to wear armbands featuring embroidered poppies.

MP Damian Collins, who chairs the Commons culture, media and sport select committee, is awaiting a response from Fifa president, Gianni Infantino, having written to him urging him to reconsider the decision.

popular
Thank you Sander Berge for allowing Manchester United fans to dream again
Sympathy for the devils? Why Manchester United don't deserve your pity
THE JOE FRIDAY PUB QUIZ: WEEK 175
Tickets for UFC London are about to go on sale
Is Ole Gunnar Solskjaer the worst manager in the league?
WWE stars reveal the most painful things that have ever happened to them
QUIZ: The hardest Gavin & Stacey quiz you'll ever take

You may also like
Entertainment
The Great Debate: Where is the fabled northern line?
Food
Would you taste a Wigan Kebab?
Football
The bleak diary of a (club) football fan during the international break
Sport
Mark Noble will never die
Sport
How I learned to love the cricket, thanks to Ben Stokes
Next Page