Glenn, who fought in both the Second World War and the Korean War as a Marine, went on to find fame as the first American to orbit the Earth in space, when in 1962 he made the trip in a space capsule called Friendship 7. 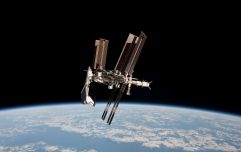 END_OF_DOCUMENT_TOKEN_TO_BE_REPLACED

He later served as a Democrat Senator for Ohio for 25 years - and even made a return trip to space in 1998 at the age of 77.

President Barack Obama was one of the first to pay tribute, saying in a statement: "John spent his life breaking barriers, from defending our freedom as a decorated Marine Corps fighter pilot in World War II and Korea, to setting a transcontinental speed record, to becoming, at age 77, the oldest human to touch the stars."

.@POTUS on the death of John Glenn: "I have lost a friend." pic.twitter.com/byKq69NLYx

This video shows the historic flight he took in 1962, complete with narration that makes it sound like a 1950s sci-fi space drama, including the line "... as his rendezvous with space approaches."

NASA were also quick to pay tribute, calling him "A true American hero."

We are saddened by the loss of Sen. John Glenn, the first American to orbit Earth. A true American hero. Godspeed, John Glenn. Ad astra. pic.twitter.com/89idi9r1NB

Glenn once famously quipped about the nature of funding of government projects:

As I hurtled through space, one thought kept crossing my mind - every part of this rocket was supplied by the lowest bidder. - John Glenn pic.twitter.com/v4UqcL7wA0

Here's a snapshot of his life, from Association Press:

popular
Shocking CCTV shows moment rival gangs engage in fierce gun fight in broad daylight
Internet left confused after hearing Salt Bae's voice for the first time
Kylian Mbappe 'getting closer' to Real Madrid transfer next summer
Barmaid dies after telling friend she had been spiked in nightclub
Over 200 kilos of cocaine with Liverpool FC branding seized
A definitive ranking of every swear word from worst to best
Man Utd players 'unimpressed' at not receiving WhatsApp updates on Rangnick
You may also like
News
Jeff Bezos calls out NASA over 'mistake' Elon Musk moon-lander contract
News
NASA is giving SpaceX $178 million to launch its mission to Jupiter moon that could hold alien life
News
NASA sending missions to Venus for the first time in 30 years
Science
Flat Earthers once again the butt of the joke after SpaceX launch proves Earth is round
News
NASA release remarkable picture of 'downtown' Milky Way, 26,000 light years away
Next Page