American and Australian authorities have hacked a 'crime app' with encrypted messages that led to the arrest of hundreds of organised crime members. Across eighteen countries, officials were able to hack encrypted messages and carry out Operation Ironside.

END_OF_DOCUMENT_TOKEN_TO_BE_REPLACED

The Prime minister of Australia, Scott Morrison, said the operation "struck a heavy blow against organised crime – not just in this country, but one that will echo around organised crime around the world".

The FBI and Australian officials have been working together since 2018 to hack the popular messaging app An0m. The application is used by organised crime to discuss business, so it's much like workgroup chats if memes were heroin and cocaine.

END_OF_DOCUMENT_TOKEN_TO_BE_REPLACED

Gangs began to distribute phones throughout their members, with many believing it was safe due to there being no camera or voice capabilities. However, authorities were able to break past encryptions and gauge a look into the seedy underbelly of the world.

"We have been in the back pockets of organised crime," Kershaw said at the same media briefing. "All they talk about is drugs, violence, hits on each other, innocent people who are going to be murdered."

A suspect is detained by police. Credit: AFP 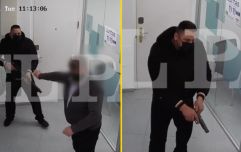 END_OF_DOCUMENT_TOKEN_TO_BE_REPLACED

The gang members did not attempt to talk in code, nor did they leave anything out when detailing their plans. Plans of murdering families, gunning down cafes, and organising escape routes were all uncovered by the joint task force.

The operation made history as the largest amount of warrants issued in Australia during one day. On just Monday, they were able to seize 104 firearms and A$45 million.

Authorities have currently issued five hundred twenty-five charges, but that number could be expected to increase in the coming days.