Two-thirds of British voters think that instead of having freedom of movement, EU nationals should have to apply to come to Britain following the end of the transition period.

That's the findings of the National Centre for Social Research's annual survey of British political attitudes. 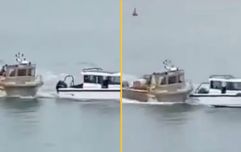 END_OF_DOCUMENT_TOKEN_TO_BE_REPLACED

62% of people polled did not want freedom of movement for EU nationals. That number has actually gone down, as 74% of people gave the same response after the Brexit referendum in 2016.

The poll also found that 51% of Brits thought the economy will be worse once the UK has fully left the European Union, highlighting that Brexit remains a divisive issue for the country.

80% of those polled thought that doctors should be classed as a high priority in a points-based immigration system, whereas only 18% said the same thing about bankers, and 19% about hotel cleaners. 60% said that care workers should be given priority though.

The poll also suggested that generally immigrants should be treated the same regardless of what country they are from. 58% said it shouldn't be more easy, nor more difficult, for a French person to move to Britain, with 58% saying the same for people from Poland, 55% for people from Pakistan, and 53% for Australians.

"Our research challenges some of the myths that surround the Brexit debate," said Sir John Curtice, senior research fellow at the NCSR and politics professor at the University of Strathclyde. "Voters did react adversely to the Brexit stalemate – but this reaction was to be found just as much among Remain voters as Leave supporters, while the experience seems to have stimulated rather than depressed voters’ engagement in politics."

The UK left the European Union at 11pm on January 31st, 2020, after 47 years of membership. The country is set to leave the customs union and the single market at the end of 2020, when the transition period concludes.

popular
The JOE Friday Pub Quiz: Week 243
Stephen Bear charged in connection with revenge porn allegations
Madeleine McCann detectives ‘given dramatic new evidence against prime suspect’
Ant Middleton leaving the UK for Australia because it’s 'too pretentious'
Glasgow protesters successfully halt deportation of neighbours by UK Home Office
A New York Times quiz can determine where in the UK you come from
Every Brit 'needs to drink 124 pints' to save the nation's pubs after lockdown
You may also like
News
I can't keep quiet anymore, I am a Dominic Cummings Stan
Politics
Leave-voting British fisherman admits he regrets voting for Brexit
News
Belfast riots: 'It feels like a game once you're in it'
News
Violence continues in Northern Ireland with petrol bombs thrown at police
News
Brits refused entry to Spain and sent back to UK under new post-Brexit rules
Next Page