The men are reportedly aged 18 and 19 years old

29-year-old Lyra McKee was shot dead following an outbreak of orchestrated violence in the Fanad Drive area of Creggan in Derry on the night of Thursday 18 April. 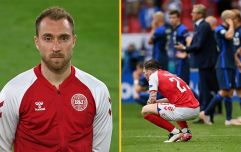 END_OF_DOCUMENT_TOKEN_TO_BE_REPLACED

It had previously been believed that McKee was wounded by gunshots fired by a single gunman - whom the Police Service Northern Ireland (PSNI) believe to be a violent dissident republican - and subsequently died from her injuries.

In a statement released on their social media platforms on Saturday morning, the PSNI said the following:

"Major Investigation Team detectives have arrested two men, aged 18 and 19 under the Terrorism Act, in connection with the murder of Lyra McKee in the Creggan area of Derry on Thursday, 18th April. They have been taken to Musgrave Serious Crime Suite."

Investigations are said to still be ongoing, while the tributes for Lyra McKee continue to pour in from all over the world, including from former US President Bill Clinton, who had a key role in the peace process:

Heartbroken by the murder of Lyra McKee and the violence in Derry. The challenges in NI today are real--but we cannot let go of the last 21 years of hard-won peace and progress. This tragedy is a reminder of how much everyone has to lose if we do.

popular
John Bercow joins Labour party and launches attack on Boris Johnson
The JOE Friday Pub Quiz: Week 248
Rio Ferdinand responds to fans calling him out on terrible Scotland prediction
Cristiano Ronaldo's lung-busting run to score Portugal opener was inhuman
Hungary pull out 'celebration of the tournament' after opener against France
A definitive ranking of every swear word from worst to best
Thorpe Park mask policy compared to racial segregation
You may also like
Politics
'I made Tommy Robinson go viral, will you forgive me?'
Sport
Romelu Lukaku sends message to Christian Eriksen after scoring for Belgium
Sport
Denmark vs Finland restarts after Christian Eriksen collapses
Sport
UEFA confirm Christian Eriksen has been stabilised after collapsing on the pitch
Sport
Covid: The football fans who will not return
Next Page