The tweet, which read, "Name a footballer better than Phil Jones," could appear harmless at face value.

But Jones has gained a reputation as a figure of fun over the years, and Manchester United complained to Twitter, asking them to remove the post which they interpreted as poking fun at their player.


Twitter recently introduced a new feature which allows users to select who can reply to a tweet, with the intention of clamping down on bullying. They claimed that the tweet about Jones was meant to be showcasing this feature, by not allowing anyone to reply to the clearly outlandish statement. They also reiterated that no offence was intended. 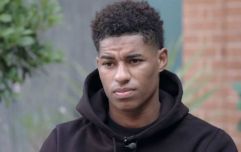 END_OF_DOCUMENT_TOKEN_TO_BE_REPLACED

A Twitter spokesperson said: "Our aim was to showcase our new product feature, conversation controls, which allows you to select who can reply to a Tweet.

"It was not our intention to cause upset and once we realised our mistake, we immediately deleted the Tweet."