“Plenty of work to do and surgery to have but I’m slowly on the road to recovery.”

Peter Dale, better known as ‘Tubes’ from Soccer AM, has announced that he is “slowly on the road to recovery” after suffering what he described as a “very unexpected major heart attack”. 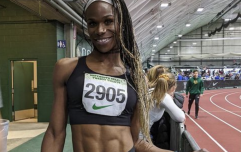 END_OF_DOCUMENT_TOKEN_TO_BE_REPLACED

In an Instagram post on Thursday, Tubes revealed that he suffered the heart attack on Sunday and praised the efforts of St. Peters Hospital in Chertsey in Surrey and the ambulance crew, without whom, he said, “I may not have been writing this message now”.

Tubes is one of the well-known figures on the popular football show Soccer AM, known for segments such as ‘one question and one question only’ and some famous interviews with footballers and celebrities over the years.

The crew from the programme wished him well on Twitter on Friday morning; fingers crossed he’ll be back on our screens in the near future.

We’ve all been rocked this week as our man @TubesSoccerAM had a heart scare on Sunday. Thankfully he’s now on the road to recovery and will be bossing a midfield near you very soon.

Sending all our love your way fella ❤ pic.twitter.com/Na4iKjDe7w

popular
Neighbour cuts tree in half in classic display of British pettiness
Transgender runner CeCe Telfer ruled ineligible for Olympics
Britney Spears tells court father won't let her remove birth control
Both of Karim Benzema's goals vs Portugal were scored on the 46th minute, 44 seconds
UEFA to scrap away goals rule next season
A definitive ranking of every swear word from worst to best
Russia warns it will bomb HMS Defender ship if it sails near Crimea again
You may also like
Sport
Jamie Carragher nails Jimmy Bullard with a crunching tackle on Soccer AM
Sport
Jesse Lingard costs fans £500 after missed penalty but quickly reimburses them
Sport
Paul Gascoigne explains why he had to cut Soccer AM appearance short
Sport
Jamie Carragher checks into the doghouse with joke on Soccer AM
Sport
Sky Sports remind us the reason for Dominic Calvert-Lewin's unusual goal celebration
Next Page